Growth hacking was invented with a mint julep and two beers 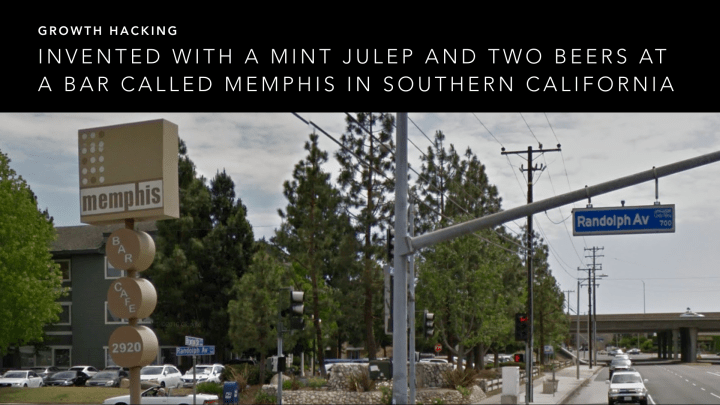 Back in 2010, on a Monday at 5 PM, I found myself at a bar called Memphis in Southern California in a heated discussion with two close friends.

Patrick Vlaskovits was cheerfully drinking a mint julep while Sean Ellis and I were each enjoying a cold beer.

At the time, Patrick was working on a startup and a book. Sean was advising a handful of high-growth tech startups including Dropbox, Eventbrite and my own company, KISSmetrics.

We had all been obsessing over the same thing: marketing in the startup world was going through a massive shift. The traditional approach wasn’t cutting it anymore. Larger companies would hire seasoned marketing executives to help grow their businesses but startups didn’t need that. In fact, it made it worse.

When startups hired seasoned marketers, they got the opposite of growth.

We had been watching companies (OUR companies) burn through capital without anything to show for it. We had been walking into board meetings after having just spent a boatload on marketing and none of our metrics had moved an inch. It wasn’t just us, nearly every company went through this.

And when we did actually accelerate the business, the wins had nothing to do with the standard marketing approach.

The playbook had changed.

And no one was talking about it.

We were making a big mistake. We would hire these expensive marketing executives who came from large companies because we thought they knew how to scale. They had the resume, why wouldn’t we trust them? They could only think in tactics. And they loved big teams. So they’d ramp up burn with a bloated marketing team and then ask their army to run random tactics on every channel available. The more expensive the channel, the better.

This approach can help when you have an established company with plenty of budget to spare. At an early stage startup, it’s death. There typically is NO budget to spend on marketing.

Startups needed a person who was living and breathing the flow of customers in and out of the product. Someone who would look at the metrics and talk to customers on a daily basis. Someone who was focused on the true north of the business. A person with the discipline to think about any part of the business as long as it was about getting growth.

Patrick, Sean, and I were on to something. This wasn’t just a trend either. It was the end of an era, a complete break from the past. It was a completely different philosophy. It was time for the entire startup marketing community to chart their own course.

And so we needed a new name.

And that’s when it came to us… growth hacker.

At the earliest stages of a startup, you don’t need a marketer, you need a growth hacker. Someone who is disciplined enough to focus on growing the business any way possible.

Back when we coined the term “growth hacker”, not much was being shared about how to go from day 1 of a startup to an IPO.

I had to learn growth the hard way. I tried so many different ideas that I can’t even remember them all anymore. Everything from paid acquisition, landing page tests, conversion optimization, viral loops, timing new content channels, all of it. We had to learn the hard way, by doing it ourselves.

To learn this discipline in the past, you would have had to personally network your way to the top growth practitioners in Silicon Valley. Even if you were living in the Bay Area, that could take years to build from scratch.

By the time I had started KISSmetrics in 2008, I was constantly making friends with people like Eric Ries, Sean Ellis, and Ed Baker just to learn everything they knew about getting predictable growth. I had to give up equity in my companies to learn about growth, and even then I would only get each advisor’s individual perspective and experience.

You would need to do the same.

You have to meet all the right people who know about growth. Even after months of sweet talking them and eventually gaining their trust (and likely giving up equity in the process) you’ll only get a fraction of what you need to know.

But things have changed. The field of growth has grown 🙂 leaps and bounds since that conversation over drinks seven years ago.

These days you can’t talk about marketing or attend a marketing event without the term growth being mentioned constantly. VP of Growth is now a common and respected job title.

Many of us who have been working on growth for the last 7 years have developed frameworks that we use daily to drive growth consistently.

“Growth” is no longer a list of growth hacks or “tactics” that may or may not work for you. Growth is now a system. It’s a process. It’s a philosophy on how to get businesses to the next level. Growth is a discipline that can be studied and applied if you have access to the right people and frameworks.

Instead of having a single “growth hacker”, companies are now creating entire teams focused on growth. The “growth practitioners” on these teams come from marketing, product, data and engineering backgrounds and are responsible for growing a product or business by working across a company to achieve its most audacious goals.

This growth system wasn’t built by theory-driven folks trying to get their name on The New York Times Bestseller lists. These are hard-won lessons developed through trial and error at the fastest-growing companies in the last decade.

It doesn’t matter what role you have at your company. You could be in the marketing department, on the product team, or even be the founder. Learning growth as a discipline is something that will benefit you directly.

As an experienced professional:

Since we coined the term “growth hacker”, the tactics for growth have been spreading like wildfire. What hasn’t spread until now is a system that helps companies build a foundation for sustainable and repeatable growth. A growth mindset that everyone within a company understands.

You can’t treat growth as a siloed activity. You need to turn it into a discipline.

It’s time to move beyond the tactics. And now you can learn all about growth with this one book…

Here’s an excerpt from one of my favorite chapters:

An Unstoppable Growth Machine
There is no question that stalled growth is one of the most pernicious and pressing problems for today’s businesses, and that’s not just true for start-ups, but for just about any business, large or small, in just about any industry you can think of. A Harvard Business Review article about growth stalls reported that 87 percent of the companies in a large study had run into one or more periods in which growth slowed dramatically, and that “on average, companies lose 74 percent of their market capitalization…in the decade surrounding a growth stall.” What’s more, the authors emphasized that the problem will be getting worse in the future, writing that “all signs point to an increasing risk of stalls in the near future,” due to the “shrinking half-life of established business models.” Among the causes of stalled growth they cite are problems “in managing the internal business processes for updating existing products and services and creating new ones,” and “premature core abandonment: the failure to fully exploit growth opportunities in the existing core business.” Growth hacking is a powerful solution to both of these problems.

Put simply, every company needs to grow their base of customers in order to survive and thrive. But growth hacking isn’t just about how to get new customers. It’s about how to engage, activate, and win them over so they keep coming back for more. It’s about how to adapt nimbly to their ever-changing needs and desires and turn them not only into a growing source of revenue, but also passionate ambassadors and an engine of word-of-mouth growth for your brand or product.

A core mandate for growth teams is to find every last bit of growth potential through a laserlike focus on continuous testing of lots of tweaks to a product, its features, the messaging to users, as well as the means by which they’re acquired, retained, and generate revenue. Intrinsic to the method is also the search for new opportunities for product development, whether by assessing customer behavior or feedback, or perhaps experimenting with ways to capitalize on new technologies such as machine learning and artificial intelligence.

At many of the firms that pioneered the method, it has been so instrumental to their success that growth teams have evolved to well over a hundred members, often broken down into subteams focused on specific missions, such as customer retention or building a mobile following. Different companies have even formed subteams of different sizes and have modulated the mix of personnel and the breakdown of responsibilities to best fit their specific business needs. At LinkedIn, for example, the growth team has evolved from an initial 15-person unit to comprise 120-plus members, broken down into five units dedicated to: network growth; SEO/SEM operations; onboarding; international growth; and engagement and resurrection of users. At Uber, by contrast, the growth team is divided into groups, including those who focus on adding more drivers, growing the pool of riders, expanding internationally, and more.

No company today has any reason not to establish a growth team—or multiple teams as the case may be—and doing so doesn’t require abandoning traditional organizational structures or traditional marketing strategies. Growth teams don’t necessarily replace more traditional departments, but rather complement them, and help them optimize their approaches. At early stage start-ups, avoiding these silos from the start is advised, but as a start-up grows, more traditional marketing groups can be established alongside a dedicated growth team. And at larger, established firms, teams can complement the existing product, marketing, engineering, and business intelligence groups, collaborating with them and helping to open up more effective communication across them.

As Sean’s experience with Dropbox shows, the process can be implemented by even the smallest of teams, which for many start-ups, especially in the early growth phase, should be run by the founder and comprise the entire company. For larger firms that must contend with existing structures and cultures resistant to change, small teams can be set up independently and even for finite projects, like perhaps the launch of a new product or a specific marketing channel, such as mobile. Teams can range from dedicated units built from the ground up, to groups made up of existing staff from different parts of the organization, to ad hoc groups that form as needed. Many evolve in size, scope, and responsibility over time to meet the specific needs of the company at any given moment.

Growth hacking is a method designed to be easily tailored and adapted to the specific needs of any team or company, large or small, at any stage of growth. And its rewards are many. Here are a few benefits of growth hacking and why they are so essential now, more than ever.

Love this excerpt from Hacking Growth? Buy the whole book on Amazon today!