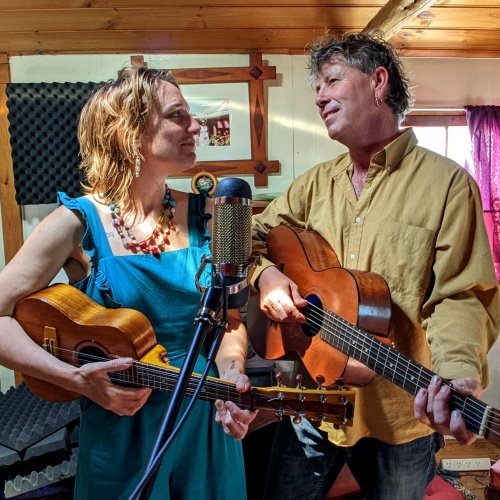 Bella Frankie, a newly formed North Coast alt-folk collaboration have released their debut single, “Rumi”, with their debut album “Falling in the River” set for independent digital and vinyl release in September.

“Rumi”, the 14th century poet, and the little boy living two doors down in North Lismore, brings about a reflection on the power of words to heal. This poetic eastern-influence folk song, whispering with Auto-harp, three-part harmonies and melodic cello, fills you up inside with harmonic warmth in a place you never knew was empty.

Bella Frankie are a contemporary folk duo formed between Michael Turner and Ajita Cannings, hailing from the mud flats and tidelands of the Northern Rivers of NSW. Their musical collaboration formed in 2021 when they fell into a musical and heart collaboration, merging their unique sounds into capacious harmonies and authentic folk yarns.

“Rumi is one of those tunes that keeps taking you by surprise. Lush string parts and vocal harmonies give way to a gear shift in the later verses that picks up the pace and carries the story with it. It all comes back to a beautiful soft landing at the end. Class!”
-Bernard Fanning- Powderfinger

Their debut record was recorded in Eden’s Cottage, Flinders Island Tasmania, over the summer of ‘21 and is due for electronic and vinyl release in spring this year. “Falling in the River” is a genre-crossing folk, pop, blues experience which embraces session musicians from across Australia, nestled in the sound of the old cottage and wind-swept landscape recorded on warm ribbon microphones.

Michael is an ARIA award-winning musician of Wild Pumpkins At Midnight. The Pumpkins came soaring out of Tasmania in the early 1980s, conquered Melbourne’s mercurial music scene and played Europe for a decade. Michael played bass with Dan Rumour and The Drift, founding member of The Cruel Sea and has played with The Romaniacs, The Durga Babies, and The Ex-Isles. Micheal recorded Sara Tindley’s album Wild and Unknown in 2017. Ajita is a newcomer to the folk music scene shifting stages from the theatre, she creates eclectic and poetic tunes on her bespoke Bunya-pine ukulele.

They are passionate folk musicians, who write songs to warm and transform the communities they play for, and are community cultural development artists, having created local performances in India, Switzerland and Australia’s coastlines and deserts. Bella and Frankie are Michael and Ajita’s black dogs, a symbol of the simplicity of being together in the love and joy of music.