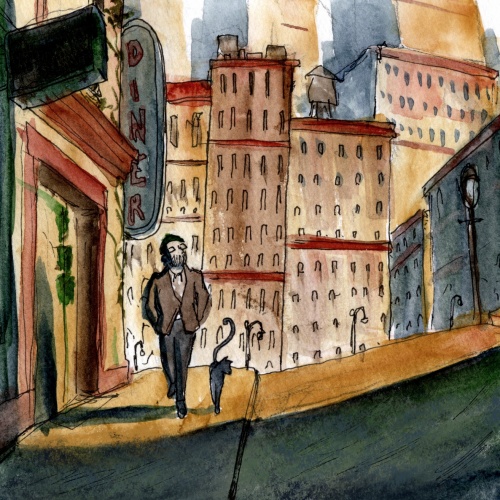 With profound poignance, the fifth single off Our Violet Room’s upcoming album “Loss (and I)” delivers a heart-wrenching look into a relationship at the beginning of its end.

Releasing music under the moniker Our Violet Room, indie singer-songwriter Matthew Birch is gearing up to release a 7-track debut album which chronicles a relationship found and lost. The fifth single to be released, “Loss (and I),” out July 1, sets a candid tone for the record. Detailing the “beginning of the end of a relationship,” Birch skillfully tugs at the listeners heartstrings by expressing the simple sentiment that although there’s still love, it isn’t right to continue to be together. Paired with evocative guitar picking, Birch’s hushed vocals are tinged in melancholy.

Harmonizing with John Morningbear, the chorus hits listeners right in the gut as they sing, “And you have been here for me for many years. And you know that I will be here for many more. And I love you, dear.” There’s a palpable pain to what’s being conveyed as Birch admits his shortcomings and wrongdoings within the relationship. “I saw your anger, not your pain” he sings, yielding to the hurt caused. Nevertheless, it’s that chorus, which echoes the love still felt, that makes the track all the more tragic. There’s a sense in the lyrics that “Loss (and I)” is a moment of reflection, a period for Birch to look back with tender fondness at what once was. He explains that the song explores “trying to convince you and your partner that we can do this even though the writing is on the wall.” Influenced by Bob Dylan’s emotive guitar picking, Birch is able to create a subtle yet effective way of drawing out emotion organically. “It’s my goal to write music that makes you feel and inspires you to create the way my heroes did for me.”

ABOUT OUR VIOLET ROOM:

Our Violet Room is the musical project of Matthew Birch. He is an indie singer songwriter with a cinematic twist. “Making movie scores has been a dream of mine and to look at each song as a movie score has been a great way of creating”. His songs have been featured on both film and TV worldwide. His music has been compared to Sufjan Stevens, Hans Zimmer, Bon Iver , Bob Dylan, Coldplay and many other indie singer songwriters. His debut album Not Where I Thought I’d Be comes out Fall of 2022. Four singles from the album can be streamed now, “Secrets”, “Winter”, “Saved Me”, and “Till Death”.